Q1. Cadmium, a heavy metal, is toxic to animals. Mushrooms however can absorb and accumulate cadmium at high concentrations. The Czech and Slovak governments have set a safety limit for cadmium in dry vegetables at 0.5 ppm. Cadmium levels in 12 randomly chosen samples of the edible mushroom Boletus pinicola are shown in data file.
a) Hand calculates 99% confidence interval of cadmium level for this exam, confirm your calculation with MiniTab output.
b) Write proper conclusion from 99% CI.
c) State the null and alternate hypothesis you would use to determine whether the mean cadmium concentration of all Boletus pinicola mushroom in this region exceed the safety limit of 0.5 ppm.
d) Calculate the test statistic and show your calculations.
e) Confirm your results using MiniTab (show result). With  = 0.01.
f) Write a clear conclusion regarding the results of the test of hypothesis.
g) What assumptions are required for the test results to be valid?
h) Using a boxplot and a probability plot to test data for normality (with Ryan-Joiner value), explain whether the assumption of part ‘g’ is reasonably satisfied using Normality p-value.

We have performed one sample t test above .
Therefore, the assumptions are required for the test results to be valid are :
1. The scale of measurement applied to the data collected follows a continuous or ordinal scale.
2. The sample is random.
3. The third assumption is assumption of normality. The sample should be is normal.
4. The last assumption is the homogeneity of variance. Homogeneous, or equal, variance exists when the standard deviations of samples are approximately equal.
Step 8 of 8 :

Here we have to verify the normality assumption using a boxplot and a probability plot .
Steps in mimitab :
Enter Data >> Go to stat >> Graphs >> Boxplot >> One Y Simple >> Enter Details >> Output 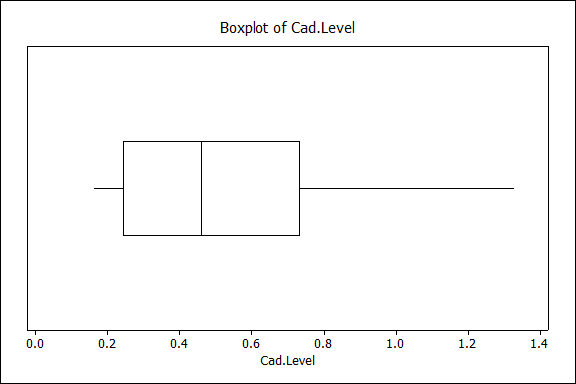 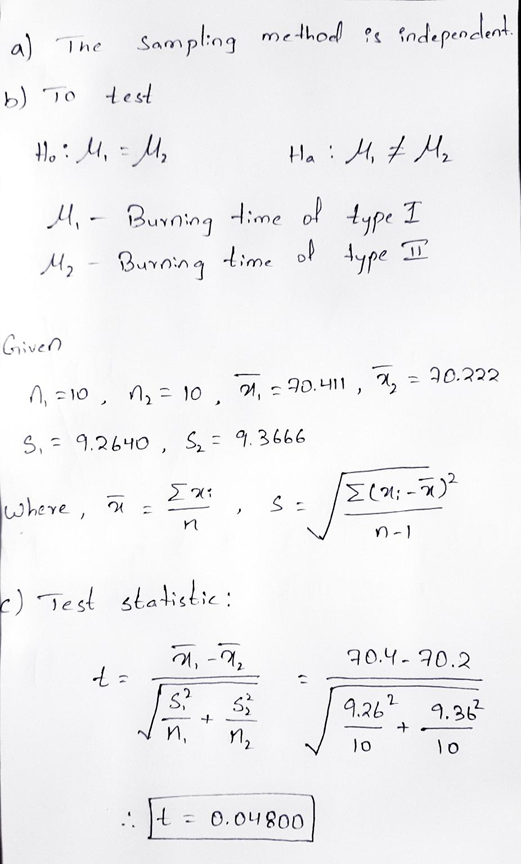 d)
Q4. (11 marks) Two creams are available by prescription for treating moderate skin burns. A study to compare the effectiveness of the two creams is conducted using 15 randomly chosen patients with moderate burns on their arms. Two spots of the same size and degree of burn are marked on each patient’s arm. One of the creams is selected at random and applied to the first spot, while the remaining spot is treated with the other cream. The number of days until the burn has healed is recorded for each spot. The data are shown in data file.
a) Is this sampling method dependent or independent?
b) State the null and alternate hypotheses to test whether the two creams are equally effective (i.e., take the same average time to heal the burn).
c) Hand calculates the test statistic. Show your calculation.
d) Run the test in MiniTab and show output. Use the 5% significance level.
e) What are the assumptions for this test? Are the assumptions met? Draw boxplot and probability plot (Normality check with Ryan-Joiner value) to check if the assumptions being met using Normality p-value.
f) Based on the p-value, interpret the results of this test.
g) Hand calculates the 95% confidence interval for the difference between the two creams. Obtain MiniTab output to confirm your results.
h) Does your 95% CI confirm your hypothesis test conclusion? Explain.
Question 4
e. Assumption :
1. Samples are independent of each other.
2. Randomly selected samples.
3. Samples should collected from normally distributed population.
Boxplot :

Q5 (5 marks) American League baseball teams play their games with a designated hitter rule, meaning that pitchers do not bat. The league believes that replacing the pitcher, traditionally a weak hitter, with another playing in the batting order produces more runs and generally more interest among the fans. The average number of home runs hit per game for the 2011 season in the American and National Leagues are found in the data file.
a) Obtain boxplots of the two data sets. Be sure to display them on the same plot. Are both data sets normally distributed? Does the spread of the data look roughly the same in each group? In other words, can we use the pooled t-test legitimately?
b) State the null and alternate hypothesis we would use to test whether there is a significant difference in the number of home runs hit per game between the American and National Leagues.
c) Run the two sample t-test two ways. The un-pooled test and the pooled test. What is the p-value for each test?
d) Do both tests reach the same conclusion? Use a 5% level of significance. Did the American League’s use of a designated hitter make any difference to the number of home runs hit per game?
Question 5 Solution:
(a) Boxplot for both datasets can be obtained as below:
Comments on the Boxplot:
• The distributions of both Sample seems to be approximately symmetrical on both sides of the median. This is because median seems to be equidistant from Q1 and Q3 both and whiskers of both datasets seems to be almost equal in length on both sides of the median.
• The IQR for American League = (1.2 - 0.86) = 0.34, whereas IQR for National League = (1.1 - 0.8) = 0.3. Hence we can say that the spread for both datsets seems to look roughly the same. This indicates that we have same variance in both groups which helps us conclude that we can legitimately use pooled t test for testing significant difference b/w both datasets.

Ho: There is no difference b/w the home runs hit per games by American and National Leagues
Ho:
Ha: There is a significant difference b/w the home runs hit per games by American and National Leagues
Ha:
Where u1= mean home runs hit per game by American League
and u2   = mean home runs hit per game by National League
(c) Running the Pooled T Test assuming Equal Variances on both samples
p value of the t test = 0.503 Running the Un-Pooled T Test assuming UnEqual Variances on both samples
p value of the test = 0.506
(d) As the p value of both test >> 0.05 at 5% significance level, hence using both the t test whether Pooled or Unpooled, we reach to the same conclusion that we dont have enough evidence to reject the Null Hypothesis and hence we can conclude that there is no difference b/w home runs hit per game by American or National Leagues.
Q6 (9 marks) In a study of Vietnam veterans who were exposed to Agent Orange, a herbicide defoliant used during the Vietnam war, 20 Vietnam veterans were randomly chosen and blood and fat tissue samples were taken from each one of them. The TCDD (a dioxin) levels, measured in ppm, was recorded for the blood plasma and in the fat tissues samples. Data are found in the data file.
(Note for the non-chemists…maybe all of you! The main ingredients of Agent Orange comprise an equal mixture of two phenoxyl herbicides – 2,4-dichlorophenoxyacetic acid (2,4-D) and 2,4,5-trichlorophenoxyacetic acid (2,4,5-T), and in the manufacturing process of those chemicals they may become contaminated with 2,3,7,8-tetrachlorodibenzo-p-dioxin (TCDD)….and that is my chemistry lesson for today!).
a) Is the sampling method dependent or independent?
b) State the null and alternate hypothesis we would use to test whether there is any difference in the TCDD level in the blood plasma and the fat tissues.
c) Calculate the test statistic. Show hand calculation.
d) Run the appropriate test in MiniTab and show output. What is the p-value for the test?
e) Assuming  = 0.05, what are your conclusions for these data?
f) What assumptions are required for the test results to be valid?
g) Using a boxplot and a Normal check plot for the differences to test its normality, with Ryan-Joiner value, decide whether the assumption of part ‘f’ is reasonably satisfied using Normality p-value.
Question 6 Solution
Working:
We have used the excel data analysis tool to run the independent t-test.
a)
The sampling method is independent.
b)
The null and alternative hypotheses are
c)
The test statistic is given by
t = -0.3315
d)
p-value = 0.37103
e)
Since the p-value is greater than 0.05, we fail to reject the null hypothesis and conclude that there is any difference in the TCDD level in the blood plasma and the fat tissues.
Q7 (4 marks) A nutritionist wishes to estimate the difference between the percentage of men and women who have high cholesterol. What sample size should be obtained if she wishes the estimate to be within 3 percentage points, with 95% confidence assuming:
a) She uses the 2014 estimate of 18.8% males and 20.5% females from Health Canada
b) That she does not have any prior estimate.
Question 7 Solution
Q.7) Given that, margin of error (E) = 0.03 (3%)
A 95% confidence level has significance level of 0.05 and critical value is,
a) We want to find, the sample size (n) for p1 = 0.188 and p2 = 0.205
Q8 (2 marks) A company that manufactures the Stinger tee claims that the thinner shaft and smaller head will lessen resistance and drag, reducing spin and allowing the ball to travel further. To test this claim they compared the distance travelled by golf balls hit off regular wooden tees to those hit with the Stinger tees. All the balls were struck by the same golf club using a robotic device set to swing the club head at approximately 95 mph. In the original experiment, 6 balls were used for each type of tee. If we want the margin of error in the estimate of the mean difference to be just 1.0 yard, with 95% level of confidence, how many balls should have been struck off each type of tee? Be conservative and set the standard deviation to 3.0 yards.
(Hint: this is to determine sample size to estimate the difference in two population means)
Question 8
<
Related Topics
Data Analysis Homework Help Service
Correlation Analysis
Meditation and Moderation Analysis
Non-Parametric Analysis
Analysis of Variance
Distributional analysis