A Solution to Work Out Business Statistics Assignment In Excel and Determine the Regression and Correlation Analysis.

The purpose of this project is to describe a random sample of 30 countries and infer to all of the countries in the world some characteristics. The following variables will be considered.

a. GDP per capita in dollars (PPP)

b. Unemployment as a percent

d. Female literacy rate as a percent (will be missing from first world countries, use 99)

e. GDP spent on education as a percent

g. Predominant religion as one name e.g., Protestant Christianity for the United States

1. For the countries in your sample, use Excel to construct the following graphs

d. GDP spent on education as a percent (Y) vs. GDP per capita in dollars (X) – scatterplot (4 points) Sheet 5

2. Construct a 95% confidence interval for the world’s mean GDP per capita and mean GDP spent on education as a percent. (10 points each) Sheet 7

3. Do your data support the hypothesis that more than half of the countries in the world are predominately Christian at the .05 significance level? At the .10 level? (20 points) Sheet 8

a. Determine the sample regression line relating infant mortality to female literacy and plot it on a new scattergram. (4 points) Sheet 9

b. Compute the correlation coefficient and coefficient of determination. (4 points) Sheet 10

e. With 90% confidence, estimate an average for all countries and predict for an individual country the infant mortality rate when the female literacy rate is .75. (4 points) Sheet 11

5. Interpret in detail the specific results of the above analysis (parts 1, 2, 3, and 4) in a managerial summary of no more than one page using non-technical language, meaningful to a person who doesn’t know statistics. (20 points) 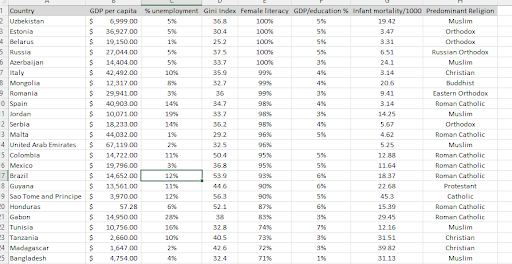 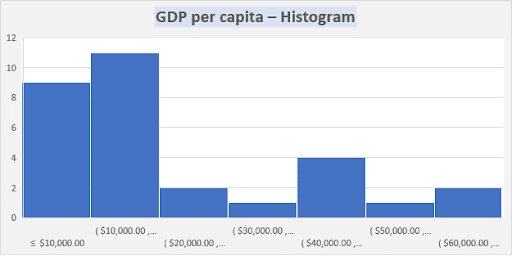 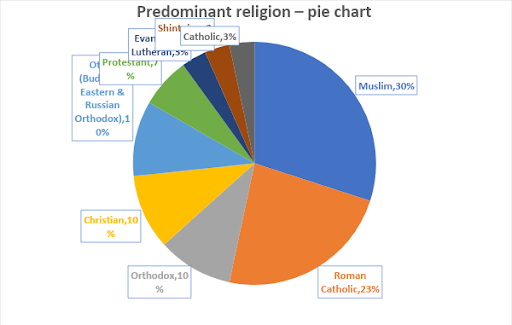 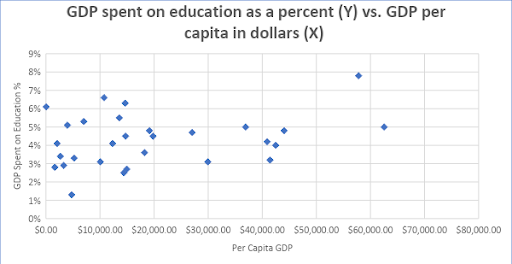 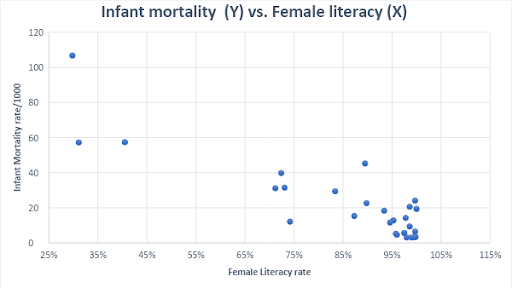 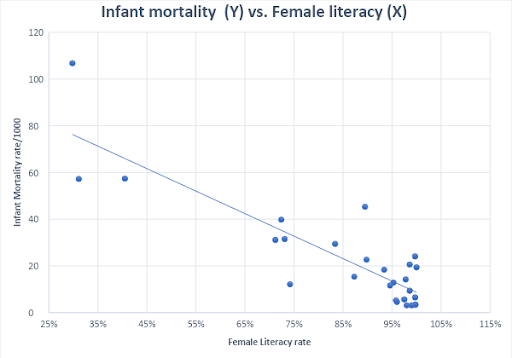 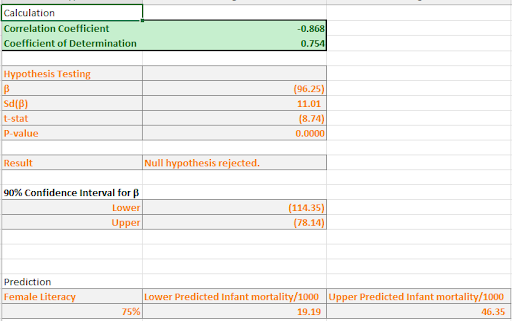 The analysis of world countries data reveals some interesting insights. The data in this work consisted of a random sample of 30 countries with attributes: GDP per capita, Unemployment as percentage, Gini Index, Female Literacy rate as percentage, GDP spent on education as percentage, Infant mortality rates per 1000, and predominant religion. This analysis, however, focuses more on the relationship between the female literacy rate and the infant mortality rates, but some other variables were also analysed on basic levels.

The GDP per capita variable in the sample shows that the majority of countries (~67%) have per capita GDP in the range of <$20,000. The highest bracket for per capita GDP was $60K-$70K in the sample with 2 observations. This is an example of right skewed data where most of the mass is concentrated on the left of the distribution, with some large outliers. The Gini Index variable shows a peak around 30-35 range with as much as 30% of observation in that interval. Predominant religion variable shows that the most frequent religion is Muslim (around ~30%) but if different branches of Christians is considered, the proportion is highest in the sample with around ~36% but it is nowhere near close to more than 50%; a claim which was tested and rejected on the basis of statistical evidence.