Produce plots to explore the relationship, or lack thereof, between your response variable, and each of these potential predictors, choosing appropriate plots for the types of variables analyzed. Describe any relationships that arise.

Build a linear model to predict evaporation (in mm) on a given day in Melbourne, using all of the predictors listed in the Bivariate summaries paragraph above. Also consider an intersection term between a month and 9 am relative humidity, to determine whether humidity has a different effect in different months. Your model should include all predictors with a significant effect on evaporation, and no predictors that are not significant. In order to do this, produce your model according to the following process:

1. Fit a model containing all the possible predictors.

2. Determine the p-value for inclusion of each predictor: i. P-values for quantitative variables can be determined using the linear model summary.

3. Remove the predictor with the highest p-value for inclusion, unless all remaining predictors are significant at the 5% level.

4. Update your model to include only the remaining predictors.

Interpret the coefficients of your model in context. This includes the intercept, and the coefficients relating to each predictor. Your interpretation should be done in a manner that can be interpreted by your client.

For categorical predictors, you do not need to explain all coefficients but provide an overview of how the model operates in relation to these terms, with an example of one of the coefficients.

Test all of the assumptions of your linear model.

MWC is interested both in the general application of your model, and in some particular extreme scenarios that it envisages. They thus seek your predictions for the amount of evaporation, in mm, for days of the following character:

Provide a table containing appropriate intervals for making forecasts on these particular days, and explain the intervals in context. Compare and contrast potential amounts of evaporation on different days.

If there is more than 10mm of evaporation at MWC’s Cardinia Reservoir, the corporation takes temporary measures to ensure a continuous supply of water, including transferring water from its Silvan Reservoir upstream:

• For which of the predicted days can we say with 95% confidence that this will occur?

• For which of the predicted days can we say with 95% confidence that this will not occur?

The analysis of Melbourne’s weather observations data shows the relationship between the evaporation on a given day with attributes like a day of the month, month, the maximum and minimum temperature for 24 hours to 9AM, and relative humidity at 9 AM. The analysis of the data shows that Minimum temperature, Month, relative humidity, and interaction between relative humidity and month were found to be significantly affecting the evaporation for the day. The statistical model was tested to be effective for predicting evaporation using these attributes. However, the day of the month did not show any relationship with the evaporation which was expected all along. The analysis shows that evaporation is high in the summer season and low in the winter season with peaks being around January and lowest around May-June.

The analysis of Melbourne’s weather observations data shows the relationship between the evaporation on a given day with attributes like a day of the month, month, the maximum and minimum temperature for 24 hours to 9AM, and relative humidity at 9AM. R was used as the choice of statistical software for all purposes of computation in this work due to its vast capabilities. The incomplete data points which had NA’s in evaporation was removed in the start to have only the complete cases in the analysis.

The first step in analyzing the data is exploratory analysis. In next section of bivariate summaries, relationship between the response variable, evaporate, and all the predictor variables have been explored individually to get a sense of the direction of the analysis. 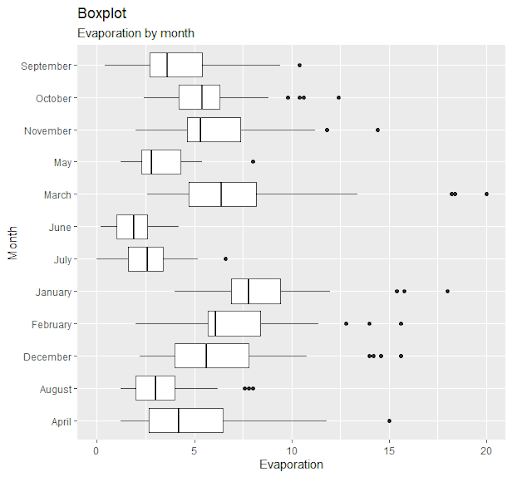 Figure 1: Boxplot of evaporation by month confirms that there are big differences in evaporation across different months

The plot resonates with the expectations that there would be a quite significant difference in levels of evaporation for different months. From the plot, it can be noted that the May-Aug period shows less evaporation and Dec-Mar shows higher evaporation levels.

Day
The Day variable represents the day of the month when the observation was made. It is not the expectation that day will make any big difference on the evaporation level because it is only for 24 hours which is a really small interval to exhibit any strong pattern. A scatterplot was used to study the significance of the relationship with evaporation on the x-axis. 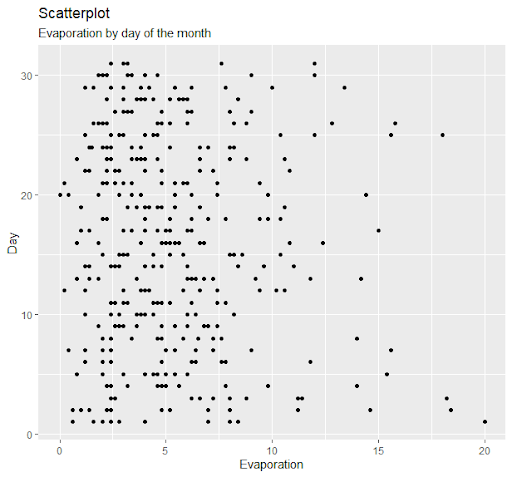 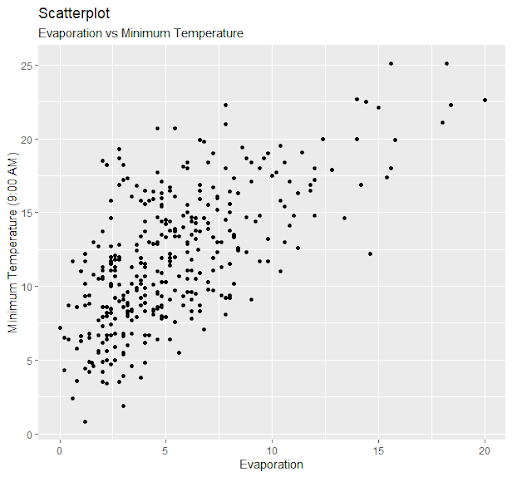 As expected, the scatterplot shows strong relationship between evaporation and maximum temperature. 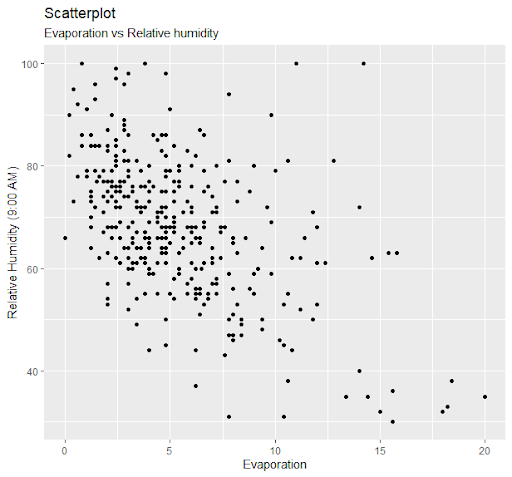 Figure 5: Scatterplot between evaporation and relative humidity. It shows a negative relationship between the two

As expected, we do see a strong visible decreasing relationship between evaporation and relative humidity.

• The first model was built with evaporation as the dependent variable and day, month, minimum, and maximum temperature, relative humidity, and interaction between month and relative humidity as predictors. The model had multiple R2 of 0.6383. In terms of significance of the variables, day (p=0.74) and maximum temperature (p=0.70) was found to be statistically insignificant. On this step, day variable was removed.

• Third model was fitted with evaporation as dependent variable and month, minimum temperature, relative humidity, and interaction between month and relative humidity as predictors. In this model, all variables were found to be statistically significant.

However, all the other terms which was expected to be significant in the bivariate summaries are indeed significant.

The linear model implemented in this work comes with few assumptions which have been outlined below and tested in the appendix of the report.

1. Homoscedasticity: The variance of residual is the same for any value of X. This was tested through scatterplot of fitted vs residuals.

2. Independence: Observations are independent of each other. This assumption was tested using ACF and PACF of the residuals.

3. Normality: Residuals are normally distributed. This was tested through normal Q-Q plot.

4. No multicollinearity: The independent variables should not be correlated. This was tested using correlation matrix.

For assessment, readers are referred to the Appendix section of this report.

The final model which was selected for the prediction in this work had evaporation as dependent variable and month, minimum temperature, relative humidity, and interaction between month and relative humidity as predictors. In R, the first category from alphabetical order was selected as reference for Month, hence April is the reference month variable and interaction term. The slopes and intercept of the models can be interpreted as below:

The ANOVA Table of the model shows the contribution of each variable towards explaining the variance of the data.

The model had R2 of 0.638 which means 63.8% of the variance in the data was explained by the predictors in the final model.
There were few outliers in the residuals, except which, it seemed to have normal distribution properties. 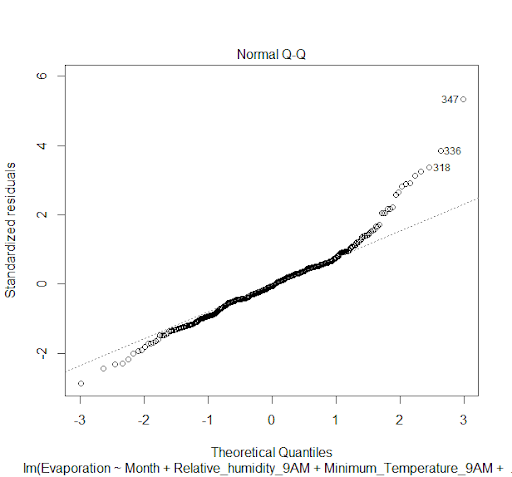 1. Homoscedasticity: The model seems to be homoscedastic as we do not see any change in the variance across different ranges of fitted values. 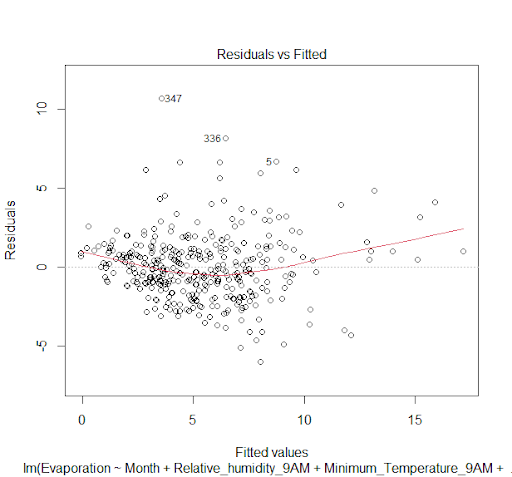 2. Independence: The observations in the model are independent as we do not see any huge spikes in the ACF or PACF plots 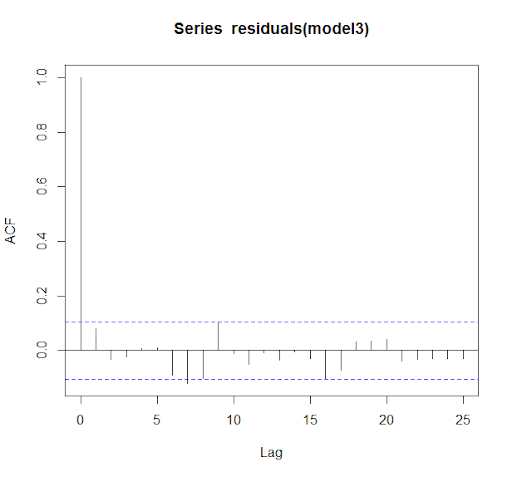 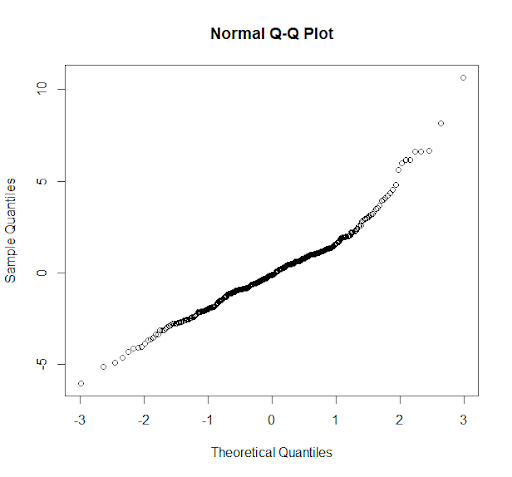 3. Normality: The model estimated residuals seem to have roughly straight line in Normal Q-Q plot which indicates that normality assumption is not violated.